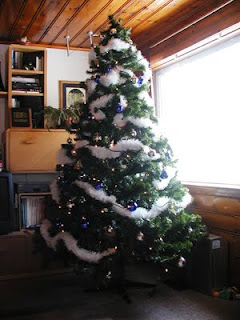 Finally! Sue has been very slow this year decorating the house for Christmas. We were starting to worry if she's going to do anything at all when last Sunday she and André got the stuff out and put it up. We have to tell you though, they kept it a bit simpler this year. Usually Sue would put up everything she has. Not this year. And we agree: less is more. It looks very festive and nice without cluttering the place. It's our house and we like it to look nice and so we think they did a good job. Fewer decorations but lots of candles and of course our singing penguins. Boy they are just too funny when they're shaking those little bells.

As you can see in the picture they have set up the tree, too. We had to go check it out of course and it smells like our tree and the balls are as much fun to play with as ever. The two only changes there are the tinsels and there are no chocolates on the tree this year. The tinsels used to be gold in colour but this year they are white. Looks like there is snow on our tree and at first we were really concerned. We thought that the roof had leaked and the snow had come in for real! Boy what a relieve to see that it's just decorations! As for the chocolates: they are a tradition in Europe. Small chocolates wrapped in tin that look like pine cones, Santa, bells and other Christmas related themes. Since André doesn't eat them and Sue wants to loose some weight they skipped them. This also goes with the "simpler" thing.

Of course there are no gifts yet and usually André and Sue don't put any under the tree at all anyway. They say they give each other (and us) gifts throughout the year and like to avoid the big rush in all the stores. But this year there will be a little package under the tree for André. We had asked Sue to get him a new key chain for us and rap it up. He had given one of his up and put it in the glove compartment of the car with change for parking in it instead of keeping the change in a cup holder. Sue did as we had asked and the present is ready to go. Now we only need to keep it a secret from André till Christmas. So we count on you not to tell him, ok?

With the tree up and the house decorated, all that's missing is the smell of Sue baking Christmas cookies. She told André that she is going to bake just one kind this year, again since André doesn't eat sweets and she wants to cut back big time. But there is this one kind she just loves too much to pass on them and so she will bake some tomorrow. Somehow the smell of freshly baked cookies is as much part of Christmas as the penguins, the smell of apple and cinnamon and candles, don't you think? And if we get lucky, we'll get to try one too! So we will be really good and hope she will notice and reward us.

With this said, we wish you all a nice week, not too much stress but lots of seasonal spirit.

hunter and trapper
Posted by Hunter and Trapper at 9:28 AM