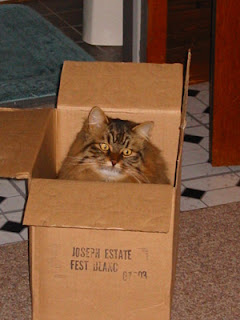 We've mentioned health and the vet a few times in our past blogs. Nobody wants to go there but sometimes one has to do things, one doesn't like. Like getting your check-up. It used to be annually but now we only have to go every second year which is much better. It isn't all that bad for me, as long as they don't try to take my temperature or to cut some of my fur off which only happens when I am sick or hurt.

The vet is a nice enough guy. Everybody at the animal hospital is very nice and knowledgeable actually. It's all this being poked and then getting needles which is not much fun at all. There is also a different atmosphere in there - like I am not in control. So I am usually glad to get out of there and go home.

When I am sick and have to go see my vet, that's when it gets hairy - really hairy! First time I was sick Sue took me there. I am not feeling well at all to start with and then the vet wants to take my temperature! I DON'T THINK SO! After he tried a couple of times to no avail while Sue tried to hold me down and I bit her, he put a muzzle on me and tried again. Muzzle or no muzzle I will not go along with this. So I bite Sue again - through that thing. Finally he managed to do it to me. In my defense I have to say I was weak and running a fewer. If it wasn't for that they would never have gotten away with it.

Once the vet was done with his examination, he gave me a shot and admitted me to stay in the hospital for a few days for observation and further treatment. Sue was standing there, blood running down her hand and dripping on the table from where I had bitten her and the vet actually looked a bit shocked at that. Wait, my friend, you haven't seen anything yet!

They put me in a cage and I didn't like it a bit. There were other animals too and this really stressed me out. So I started raising heck in there. So much so that the vet called André and Sue the next morning and asked them to come pick me up. He said that none of the patients (including me) could relax and get better because of the turmoil I created. Ok, I won and got to go home. Of course I was still sick and needed medication so André and Sue were supposed to give me a pill every day. That turned out to be a story in itself. I usually am a good patient, just ask Sue, but shoving those things down my throat became a challenge for them let me tell you that.

Anyway, I recovered after a week or so and was glad to put that experience behind me. Little did I know that there would be another one to follow. But before I tell you about that its Trapper's turn. He will tell you of his experiences next week.

See you around
hunter
Posted by Hunter and Trapper at 4:15 PM