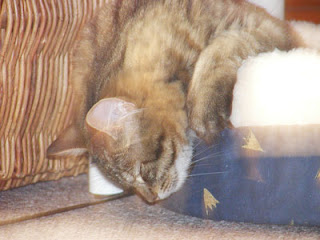 Unlike Hunter I hate to drive in the car - especially when Sue drives. So any visit to the vet is bad even when it is just for a check-up and it turns out that I am healthy.

Once I am there this guy starts pocking me and listening to my heart and lungs and whatnot. Then he gives me my shots and I am all set for a couple more years. No big deal one would think. But who likes needles? I hate them and so I try to bolt for the door any chance I get. But the vet knows me well enough and keeps that door closed. Darn! So last time I was there I tried to jump up on the top shelf in the room to escape but Sue, knowing me even better than the vet, caught me just in time to prevent that. When we were done and Sue was paying the bill it was time for me to take revenge and jumped on the shelf near the secretary's desk. See Sue had not put me in a carrier but had put a harness and leash on me thinking that this way I would be more comfortable in the car. As I said: I jumped up and things went flying when Sue tried to get me down again.

Other then routine checkups I had to go see the vet only once: One day I tried to jump on something but slipped and fell. In the process I hit really hard and it hurt a lot. That afternoon when Sue tried to pick me up it hurt so bad, that I screamed. At first she thought this was protest because I didn't get my way but when she tried it again and I screamed again, she knew something was wrong. She let me be and kept an eye on me to see what was going to happen. I went for a snooze on André's bed but after laying there for a while even breathing hurt and I started to moan a bit with every breath. Enough is enough, Sue said to André, this is not good and I am taking him to the vet. She put me in the car and drove off. As you know I don't like driving in the car and the excitement and pain combined got me to hang my tongue out and pant like a dog. Sue was very concerned by know, thinking that I had punctured a lung or something and was going to die.

Turned out that I had broken the end of my sternum - that is the bone along the chest, between the ribs. The vet gave me a shot with antibiotics and painkiller that lasted for several days and I was released home with a very, very relieved Sue. He advised Sue that she and André were not allow to pick me up for 3 weeks to give the bone a chance to grow back together which it eventually did. Just not in the right position. Instead of going front to back it now goes off to the side. It doesn't hurt anymore but I have a lasting memory of that incident and sure hope it will never happen again.

I still don't like to go to the vet but I know he is only trying to help me when I need it and he, as everybody else there, is actually very nice. So: thanks a lot vets and staff of the Callander Animal Hospital for all you do for us. Not just from me but from Hunter, too.

This is about it with regards to me and my vet. Hunter on the other hand has some more stories he can tell you. So check in again next week.
trapper
Posted by Hunter and Trapper at 10:10 AM