How to give a cat a pill 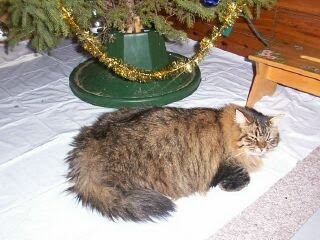 Two weeks ago I told you about the time I was sick and admitted to the animal hospital. But then the next morning the vet sent me home because of the havoc I was raising in there. The vet gave Sue pills which she and André were supposed to give to me over the next 10 days. And that was when it got interesting. If there is one thing all cats agree on it is that they do not want to take pills. And so, over the years, we have developed instinctive defense mechanisms for this situation. That I am pretty big and strong and can get frighteningly wild if I dislike something probably made it even more of a wrestling match.

First day Sue tried to trick me into swallowing the pill by giving it to me with some food. But I'm not stupid and ate everything but the nasty little bit. So she tried again, now giving me some of my favourite treats and sneaking the pill in there. Forget it - same story, different way. As if I would fall for this old trick. Finally André tried and ended up holding me down and when I opened my mouth to protest, he shoved the pill into my throat.

The next day I was prepared for that trick and determined not to let it happen again. First of all I put up a little bit of a fight when André tried to hold me so he was forced to try to corner me somehow. Unfortunately I was not at my best and didn't see that one coming. It is relatively easy to back out of a hold but once your back is to the wall it becomes a bit more difficult. So he got me again.

Third day I tired to scare Sue off by growling and trying to bite her, which I really don't like to do to her, but she left me no choice. This was really making it difficult for her - but not impossible. I had to find a way of holding them off and quick. So on day four I combine my efforts to backing away and growling at the same time and biting as soon as they got their hands on me. They now had to join forces, one trying to hold me while the other was attempting to make me take the pill. I lost that wrestling match but not without putting up a fight for several minutes.

From that moment on the odds were stacked heavily against me since now they teamed up right from the get-go every morning. After trying different ways of holding me down they finally settled on this strategy: André would kneel over me so I could not back out with my back up against him and stuck between his legs. He would then hold my head with both hands in what looked as if he was strangling me. Then Sue moved in and tried to pry my jaws open and then shove the pill so far back into my mouth that I had no other way to get rid of it than to swallow. This was a mean maneuver and I finally had to admit defeat.

I had fought hard and as long as I could but in the end 2 humans against 1 cat turned out to be more than one cat - any cat - could possibly handle.

See you next week
hunter
Posted by Hunter and Trapper at 9:25 AM