All cats are the same? 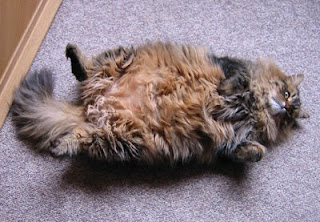 Whoever said this must have referred to the character of cats as it is very clear this statement could not have been made with regards to looks. I mean there are short hair, semi-long hair and long hair cats. We come in all kinds of colours and our coat can be anything from plain to striped to spotted to marked in endless variations.

But is it true that all cats are the same? No, absolutely not! Take us for example. Although we share looks (and pretty darn georgous ones we might add) we still are so different in character. Let's start with Hunter. He is one big fluffy, cuddly guy, very gentle with kids yet scary when he gets angry. It's the wildcat in him which also shows in his size and strength. He is totally focused on Sue and 150 % loyal to her.

Hunter does not like to lay on peoples laps but when he does it anyways, it's always with Sue. He seldom plays when someone is watching him - as if he was embarrassed of showing this side of himself. But when he thinks he is alone, he can chase a toy-mouse, trowing it high into the air or chase me, play hide and seek or simply chase his own shadow or some imaginary prey. His favourite toy is a small white pompom Sue made for him years ago and he looks so funny walking around carrying it in his mouth.

Hunter likes to lay on Sue's spot on the couch but when she comes and asks him to leave, an ever so slight touch will make him get up and leave the place to her. He also likes to lay on his back, all four paws stretched out and expose his belly. But careful there: you might scratch him a few times and then he decides he's had enough and bite you. Hunter goes and jumps on André's and Sue's bed every night when they go to bed. He will lay there for a few minutes and get pet then leave again. It's his way of saying good night to them.

All in all he is a great companion and very loving and devoted.

trapper
Posted by Hunter and Trapper at 12:08 PM