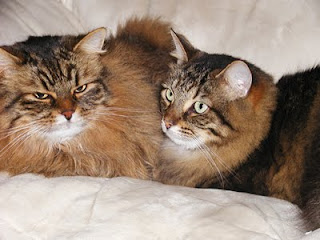 Yeah, it's fall and that means it's hunting time. No, not what you think. We are talking mice!

As it is with so many houses in the country side, ours is not exactly mouse proof and come fall, the buggers try to get in and set up shop for the cold season ahead. Needless to say that André and Sue don't like that at all - but we do. Hey, we are cats and hunters by nature after all and some extra excitement can't hurt, or can it?

Well there was the one time we almost wrecked part of the house. It started innocent enough: Hunter had caught a mouse in the middle of the night and I wanted to get some playtime with it too. Of course he didn't even think of giving the mouse up to me - catchers keepers (or something like that), you know. I on the other hand didn't think of letting this chance pass me by without having some fun. So I made my intentions known to Hunter by growling at him. He, of course, growled right back and before you know it we were in a fight with each other. This had some unexpected consequences: the mouse got away! And what's worse, it woke André.

Yeah, I remember it. When André got up to see what was going on, it woke Sue, too. And then all hell broke loose! We were fighting and André came after us to break us up. Meantime the mouse made it into the bedroom where Sue, still halfway asleep, saw it running under the bed. She screamed and - instantly wide awake - jumped out of bed. But she didn't stay there for long. She quickly realised that she was now standing at the same level with the mouse which could come running at her at any time and so she jumped onto the bed.

By now we had taken off after the mouse followed by André who still tried to catch either one of us. Fat chance! You try to get into the way of not one but two cats determined to catch a mouse, you become the "enemy". Since Hunter was a bit slower than I, André caught up with him and grabbed him. Hunter did not exactly agree with that and bit André who in turn let go of him. While this happened I was under the bed and the next moment we're all on our way back to the living room: first the mouse, than I, than Hunter who jumped on me when I ran by. Taking up the rear came André who promptly stumbled over us and almost took the glass unit with about 200 CDs in it down in the process. Sue was still on the bed, screaming at André to do something.

The mouse ran behind a piece of furniture and Trapper and I took up positions on either side to catch it as soon as it tried to come out. Now André got hold of a broom in the sitting room which Sue had left there for now obvious reason (unless she expected something like this to happen, which we doubt) and turned around just as the mouse made a run for it. Trapper jumped on the mouse and grabbed it and this triggered a new fight since this was my mouse and I wanted it back. Again the mouse got away and not knowing what to do first, separate us or catching the little pest, André turned first one way than the other knocking some stuff off the nearby furniture with the handle of the broom. The chase kept going for several more minutes during which we lost and recaptured the mouse a couple more times and a flower pot, a box of tissues and some other stuff went flying.

We finally got the mouse but André took it from us which almost got us into yet another fight. But this time we just growled at each other and then Sue separated us - now that André had the mouse under control she finally dared coming out - and the dust settled. We calmed down during the time it took André and Sue to clean up the mess and by the time they went back to sleep we were friends again.

Yep, this was exciting. We've caught some more mice since but never again did it go like this.

See you around next week - who knows, maybe by then we have another hunting story for you.

hunter and trapper
Posted by Hunter and Trapper at 11:05 AM