The thing with the water 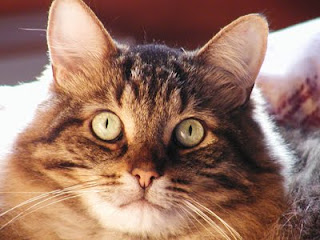 Last week we told you about the mouse hunting in fall. Well there is something else which is a sure sign of summer being over at our place: it's the time when André and Sue fill up the hot tub and start using it.

As you all know there is a whole lot of water in a hot tub and that is something which has always attracted Trapper even though he would never go in there. At least not on purpose.

You have to know that André and Sue only got the hot tub a few years ago. Before they had it, Sue would take a hot bath almost every evening. Not to wash, she takes a shower every day for that, but because she complained that she was cold. Well, winter does that to you. Anyway, Trapper would always keep her company in the bathroom while she was soaking, reading a book and having a glass of wine. He would sit patiently on the rim of the tub and wait for her to come out again. Nice little fellow, isn't he?

It's true, I used to do that and I loved it. Like Sue I am cold quiet often and it was always nice and warm in the bathroom. Nowadays I jump on the rim of the hut tub but it's not the same anymore. Now, here is the story about me keeping Sue company: after laying on the rim of the tub one evening and casually moving my tail forth and back, I noticed something I had never seen before. It did look a bit like the tip of my tail but not quiet the same at the same time. So when it came up near my head I jumped on it and when I moved it disappeared. Oh! It's still alive! Well, you must know what happened next. Something moves, a cat has the obligation to chase it. So I did. I started turning in circles - on the rim of the tub - and the funny looking thing kept getting away from me. So I turned faster and the thing kept going faster. Meantime the rim of the tub had become wet and then I slipped and fell right into the tub!

Funny guy here didn't recognise the wet tip of his own tail! Geeez. Well he was pretty young and still green at the time so he is excused. All André and I heard that evening was Sue screaming then Trapper meowing miserable. As he just said, he had fallen into the tub and Sue had to rescue him. Being wet and in a panic he could not get any traction to get out on his own so Sue grabed him got out of the tub and then toweled him down as good as she could. He still looked a bit funny when she let him out of the bath room, pretty dry again but somewhat shaggy. But if you think that experience cured him from chasing his tail again while on the rim of the tub, think again. He did it again and he fell in again - not once but twice since!

Now that André and Sue have the hot tub, Sue is not taking baths anymore so the risk of me falling in again has disappeared. The only thing Sue is worried about is that one of these days I will end up in the hot tub. Why? Because I still love keeping her company while she warms up and so I jump on that rim now. And she thinks that maybe one day I will misjudge the jump and end up in the water - again. Sue, don't worry, I am careful. I promise.

There it is, another fall story. See you all next week.

hunter and trapper
Posted by Hunter and Trapper at 12:42 PM