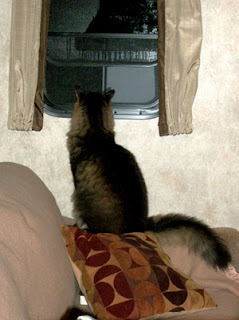 We have settled so well into our new life that we actually do what we had planned for André and Sue: relax and live one day at the time. Well, you might think, isn't that what cats do anyways? Maybe some or kittens who don't know any better or old cats who think they've seen it all. But not us. We are at the prime of our lifes and have a lot to see yet. So we have a lot of thinking to do. I mean not only do we have to make all those important decisions but we also have to constantly figure out how to get André and Sue to do what we want done or to go where we want to go. So an unscheduled stop like the one at the truck stop where our car broke down, really poses a serious problem.

That is so true! While we were stranded there we got bored because André and Sue were not around most of the time. They had abandoned us for the comfort of a motel room. It's understandable in one way. There was no electricity in the fifth wheel and hardly any water in the fresh water tank. For some reason they had come into the habit of traveling "light" in that respect. A couple of batteries for emergencies, minimum of fresh water and empty waste water tanks. Saves on gas but has its drawbacks as we came to realize. Anyhow, when they were around Sue wouldn't even take us out for a stroll. She was afraid that all those big trucks constantly coming and going would spook us. And she might have been right. They are huge and loud and we are so small. How would the drivers have seen us?

Though it probably was saver this way, it was boring as Hunter here just said. One can watch those big rigs only for so long before that, too looses some. So we were condemned to sleeping, hanging around and hoping that André and Sue would come spend at least a little time with us. You can understand that we were extremely excited when we finally hit the road again. Now we are back in the old routine and just drifting along in life. A couple of nights here and there, the usual inspection of a new place, making sure we get our treats and taking it easy in general. With fall the days are growing shorter and temperatures are dropping and we enjoy the comfort of the fifth wheel. Looking out the window we can observe the changing colours on the trees and when we go out for a walk there are now different smells in the air. Soon it will be colder even and we have to plan for the winter. Should we change fur or would it be better to somehow get André and Sue to drive south rather than north (as they do now) and keep the warm-weather fur on?

We like the warmth and therefore would prefer the second. We would also like to travel further and see more. This means that we are currently working hard on getting André and Sue to understand that the south is the place to be in winter. Florida maybe or some place like it. Just as long as we get to go along which excludes destinations where one has to fly. Flying would be horror for us. So we are happy to see that the two have been looking at maps of the southern US lately. We will find out soon. From what we gather, we will go back to North Bay in the next few days but will stay there only two or three weeks. After that we will find out whether or not André and Sue got the message and are headed in the right direction.

Posted by Hunter and Trapper at 2:29 PM