Blame it all on Princess? 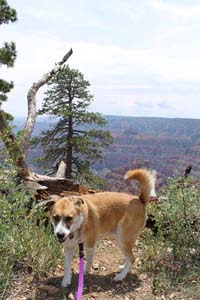 You have to read this! We could not believe what Princess got Sue into the other day. And I believe it was all her fault. If it hadn't been for her, Sue would never have gone on this walk.

I'm not so sure about that, Hunter. After all it was still Sue's decision and she doesn't want to blame any of it on our dog. As a matter of fact, she is quiet proud of how Princess did through the whole thing. So let's see what our fans think of this stupidity. A few days ago André and Sue were at the Grand Canyon and they had Princess with them. They enjoyed the view from the north rim and took a lot of pictures. When the time came to move on to another location and take more pictures there, Sue decided to take Princess on a 2-mile walk along a trail and meet up with André at the other end. So off they went, not really having prepared for this adventure. They had no water, no emergency gear, nothing but Sue's cell phone (which of course had no reception, duh!), thinking it would take them probably no more than an hour or a little more to get there. Americans are not exactly known for their love of walking so the trail couldn't possibly be that bad, could it?

That's what they thought anyways. It was supposed to go downhill and they've walked further than two miles many times before. The trail started out just as they had expected, no big deal, more or less level. Then they came to a steep decline. This made sense since the end of it was at a lower elevation and Sue estimated, that by now there was only about a mile left to go. Somewhere the decent had to come. It was really steep though, they almost had to sit on their backsides and slide down at times. When they arrived at the bottom, they could hear the road going by only meters from where they were. The trail then climbed up again and rounded a corner away from the road. Sue and Princess kept walking and came to some great view points were Sue took pictures. Then they kept going, around another corner, downhill and up again and further and further.

By now Sue was starting to think that something wasn't right here. Maybe they've taken the wrong trail but she estimated that they had long passed the two-mile mark and still no road was to be seen or heard. She figured that a decision had to be made: move on and see if the trail-head was around the next turn or turn around and go back to where they've come from. It would be a long walk back, they had been under way for close to two hours by now. But if they kept going every step they took now would add to the return trip if the road could not be found soon. Although Sue didn't exactly cherish the idea of walking all the way back and Princess was tired and thirsty, Sue made the call to turn around. So they started walking again, both of them tired and knowing that by now André would be worried about them. But what choice did they have?

When they came to the same gully where they had heard the road go by close, Sue looked up the embankment trying to figure out if they could make it up there. They tried one spot but could not get good footing. It was simply too steep. So back to the trail it was but after climbing up a small portion of it Sue had to use her hands to help her climbing and Princess almost didn't make it either. Sue once again looked at the embankment across the gully and saw that the road was only about 75 feet / 22 meters up from the trail. "Let's try this again" she said to Princess and went back down. They chose another spot and started climbing up towards the road. It was so steep that Sue had to help Princess by pushing her up in front of her. Princess could not find footing in the loose soil and Sue only managed by hanging on to small trees, roots and a big dead tree that had fallen down the embankment.

After finally reaching the road Sue flagged down the first car that came along. It was a small two-seater and they couldn't give her and Princess a ride. But the driver promised to continue to the top of the road and find someone with a bigger car to pick them up and drive them to the trail-head where André was waiting. He gave Sue a bottle of water, too, which she drank about half of and offered the rest to Princess in her baseball cap. After that the two got help from other people. First the driver came back (alone) to take them to the view point. There someone else tried to call André but André's phone had no reception and so he didn't answer. Finally a park worker who had come to collect garbage gave Sue and Princess a ride to the trail-head. Turns out the trail is actually 3 miles long (as opposed to the 2 miles the sign said it was) and they had been very close to the trail-head when Sue decided to turn around. André had been worried and had driven forth and back between the trail-head and the view point, thinking that maybe they had turned around for some reason. He was just about to make another trip to the view point when the worker dropped Sue and Princess off.

Thank goodness all ended well. André, Sue and Princess were reunited and made their way home, glad that everybody was ok. So now what do you think? Was this Princess' fault or not? Should we be concerned when Sue takes our dog some place or can we trust in Princess to take care of Sue?

Posted by Hunter and Trapper at 7:55 PM