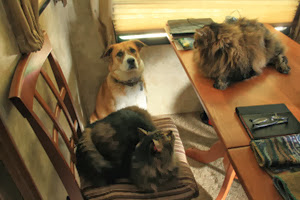 Since our last blog we had to make a very difficult decision: Princess keeps nagging us about getting in on our blog which we had denied her when she first brought it up. But things have been and are still changing a little bit with her and we have to admit that after having had her for 6 months, she is becoming more of a family member than just a pet to us by the day. At first we had thought that we would never accept a dog in our home. Then we got to kind of like her to the point that we decided, she can stay. Then there was the incident where she protected André and Sue at Yellowstone National Park. That made her some points with both of us. But then there was that other thing, too, when she and Sue went on that walk in Grand Canyon National Park, which sparked some doubts again.

So we sat down with her in a meeting to determine what to do. And we came to an agreement on how to proceed, which is more than what can be said for the US government at this time. Those guys should all get cats and learn from them how to make things work. But let's not go into politics. That is something smart beings such as us stay away from whenever we can. Anyhow, we decided to let Princess join us in our editorial meetings. We will hear her points and opinions and then decide if and what to include in our blogs. Then we will review that agreement in a few months and if she turns out to have made some valid contributions, she will become a part of our team. Fair? We thinks so.

See, we actually think she's smart. Just recently she has learned the proper response not only to a command but to a hand-signal. Now André and Sue can make her sit down either with a word or by showing her this signal. Sue even thinks of teaching her more commands and more hand-signals, too. She would like to teach Princess a certain response for a "yes"-signal and another one for a "no"-signal. This way she could impress people by asking Princess questions and Princess giving the correct answer, making our dog look really smart. We have to see that before we believe it of course but hey, crazier things have happened!

It would help us find out just how smart our dog really is, though. I mean is it intelligence to do what one is being told, or signed for that matter, or does it mean Princess is too stupid to have an opinion and a will of her own? Gee, she now even sits without André and Sue having to tell her to. Before you know it she will be doing all kinds of stuff simply because Sue wiggles a finger or André farts (sorry for the language).

Now, that is a very ill chosen example, Hunter! We all do something when André farts (sorry for the language), whether it is putting a paw over our noses or leaving the room. But you made your point. That's why this new trick / hand-signal thing will be so helpful to us. It will let us know for sure if we should be proud of Princess or embarrassed at her. I put my money on proud. 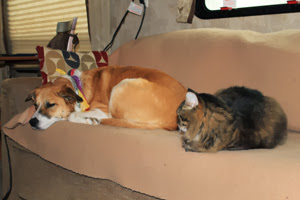 I'm not betting against you, Trapper. I, too, think our dog is really smart but I still like the idea of her proofing it to us. And once she's done that we can try and teach her some stuff of our own, like snuggling up with you. Yes, don't act so surprised! I know you would like that especially with the weather turning cold again and Florida still a few weeks away. I saw the way you looked at her the other day when you both were laying on the couch.

Well, ok. As for now here is Princess' first contribution: "Thanks for giving me a chance, guys." Well said, Princess! That's one point for you.

Posted by Hunter and Trapper at 6:08 PM