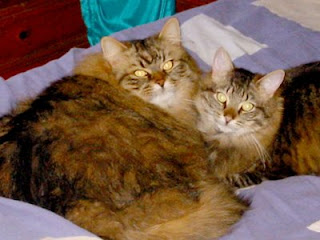 Ok, we hear you. Some of you didn't like the comment we made about dogs last week. You have to look at it this way: we were actually paying them a compliment by admitting that they can learn languages. But don't expect us to go any further than that - we are cats after all. And the proverb "fighting like dogs and cats" isn't just some invention. It describes the relationship between us and them pretty accurately. So whenever we hear André and Sue talking about getting a dog some day (they love dogs as much as they do cats for some reason) it scares us a bit.

Actually cats and dogs can go along just fine as we know from quiet a few examples. So I am wondering if that would work for us, too. What do you think? Maybe we could train a dog, especially if it's a puppy, and then have some fun with it. I saw on TV that all you need to make this happen is a calm and assertive pack leader, so if the puppy would understand that, the two of us could be that leader and make it happen.

Yeah, possible. I mean it's not that we are opposed to other animals - some of them would really be fun to chase. Well, there was the time when Hunter moved in. Sue had two birds at the time and she and André wanted to make sure Hunter would not harm or scare them. As if he had a chance to get to them in their cage. That's almost cruelty on animals - put them right in front of you with wire in between. Takes the fun right out of it.

It was frustrating, I must admit. Whenever I approached the cage, André and Sue would spray me with water. And you know how much cats hate water! Only my coat is so long and dense, that the water never reached my skin and therefor did not bother me the least. I would just close my eyes when they aimed for my face and sit there, dripping wet. It took them some time but they eventually got the message: no matter what they did to keep me away from the birds, I would not budge. So after a while they gave up. It was then that I started go sleep right on top of the cage. Didn't seem to bother the birds at all. They would actually climb up the side and pull on my fur - true story!

Well, enough of that, lets go for a snooze. See you all around

hunter and trapper
Posted by Hunter and Trapper at 2:20 PM