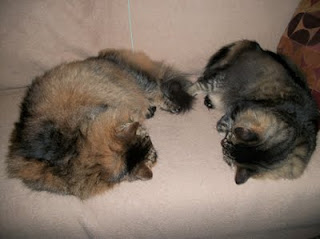 In our last blog we told you that we are expecting company from André's mom. She has arrived and is just as nice as we had thought she would be. She even lets us use her bedroom during the day and talks and plays with us. Only at night are we not allowed in her room but that is because André and Sue don't want us to go in there. Anyways, here is a story which happened during preparations for her visit and which I want to tell you: the day before André and Alice arrived, Sue cleaned our fifth wheel, did the laundry and got everything ready for our company. And that day I got myself into a jam I was lucky to get out as quickly as I did.

Yeah, nosy here has to go wherever there is a hole big enough for him to fit. I was wondering how he would get himself out of this one. You see, Sue very seldom uses the couch in the living room but that day she not only opened the drawer underneath it but also sat down on the couch later on to read. This was Trappers good luck. When Sue had opened the drawer he had to get in there of course. Only Sue didn't see him do this and closed the drawer again without giving it a second thought. She had taken out an extra blanket which she would use while Alice would be using her duvet during her stay with us. Sue then took that blanket to the front bedroom and put it into a duvet cover. That's really interesting by the way. We had not known that the couch in the front room can be turned into a bed! It's a pleasant surprise: another place for us to go sleep. But back to the story. Trapper gets under that drawer and when Sue had put the blanket in its cover she returned and closed the drawer not knowing that he was in there.

Exactly, and she wasn't missing me since I make a sport of  frequently disappearing and letting André and Sue look for me. Now I found myself trapped not in the drawer but between the front panel and the actual storage space. There was no way out of there unless Sue would open the drawer for me. And there was no telling when that would be. We had never seen that drawer open in all the time we have been living in our fifth wheel. It could take weeks! So I'm lying there trying to figure a way out of the situation.

And then Trapper got lucky: after finishing with her work Sue did something she seldom does, she sat down on that couch to read her book. All of a sudden I see Trapper pawing at her feet. The gap between the front panel and the floor is just big enough for him to reach under it but by far not big enough to crawl out. Boy Sue sure was on her feet  quick and, realizing what had touched her, she let Trapper out. Who knows how long he would have been trapped in there if Sue had not chosen the couch that day over her usual place.

So you see there never is a dull moment here.

Posted by Hunter and Trapper at 9:02 AM No comments: