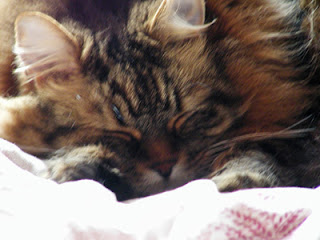 Yep, it is official: we are back on the roads for another season of traveling. For some time there we had hoped this would be over but André and Sue are determined to go see the West coast. So here we go again with all the shaking and rocking in the fifth wheel while they travel comfortably in the truck. And if that wasn’t enough, Princess the dog gets to enjoy the ride in the car as well. We are the only ones who have to put up with all the being tossed around when we hit a rough spot in the road.

It’s just not fair! On the other hand we have the whole space to ourselves and don’t depend on André and Sue for letting us go to the bathroom or having a drink or a snack. We don’t know how that works for Princess but we are pretty sure that she has much less room and has to put a cork in it until they let her out to relieve herself. And in André and Sue’s defense we have to say that so far they’ve chosen better roads than last year. That trip across Labrador was murder and we sure hope they will never do something as stupid ever again. We were both lucky to get through this without concussions and broken bones.

Maybe it will help a little that Sue stayed with us in the fifth wheel the other day when it was moved around the lot of Sicard RVs in Smithville where they had some warranty work done on it. She got to experience first had what it is like to be in here when the thing is moving and from the look on her face she had not expected all the moving and noises. Let’s just hope, that she will keep that experience in mind when they choose the roads they want to travel in the future.

I sure hope so, too. After all we are looking at yet another several thousand kilometers this summer alone and who knows what they will come up with after that. I mean traveling is nice and we get to see a lot of new places and all but there is something to be said for the comforts of a steady home as well. Until we (maybe) will have one of those again, we just have to make the best of the situation. We will also tell you about our 2013 adventures. So check in with us, with all the kilometers on the road will come more blogs again, too.

See you around
hunter and trapper

Posted by Hunter and Trapper at 10:55 AM No comments: