Our dog turns out ok 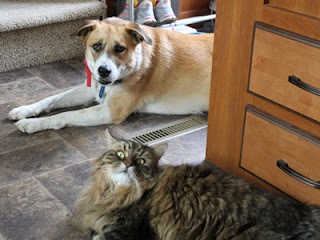 We have to tell you, after having had Princess for about 20 weeks it turns out our dog is not half bad. I mean we put all our trust in André and Sue when they picked her out at the shelter but they did a good job choosing our new pet. Princess doesn't bother us a lot and we kind of got the rules laid down by now.

True, she still tries to play with Trapper here but she makes sure not to hurt him. When she jumps on him for example, she makes sure her paws land on either side of him and not on Trapper himself. He only gets scared a bit when she tries to grab on to one of his paws and pull him off the couch. Yeah, she is gentle when she gets a treat from André or Sue and so far she's never bitten Trapper, at least he's never screamed. But he does not like it a bit when she tries to get a hold of him by grabbing on to him.

Well, how would you feel if she would tray to drag you off the couch? I bet you would hiss and growl at her to let go. As a matter of fact you do that anyways to keep her at a distance. Then again Sue caught you on camera laying there on the floor next to her and all was well. No fighting or anything. Admit it, you are curious about her as much as I am. I've seen you sneak up to her and sniff her and you walk by her as if you two had known each other for a long time and settled into some kind of relationship.

Yeah, you got me there. I don't like to admit it and hiss and growl at her when André and Sue are watching but when they're not, I get along with Princess ok. It's not that she does much for us. I mean she's not serving us or something and she gets to go out with André and Sue a lot. It's is a mixed bag with her really. On one side she takes up space in our fifth wheel and she gets to go places with André and Sue all the time. They have gone out for hours or even days at a time a lot lately and she always got to go along while we had to stay home. On the other hand who wants to drive around in the car just to see stuff? Not me! I actually prefer to stay here and snooze away and I know you do, too. Princess going with André and Sue means that we have the fifth wheel to ourselves and can do whatever we want.

Right. And you just said it: André and Sue are going out all the time lately and we used to be a little concerned about them. What if they didn't find their way back home or something happened to them? Who would take care of us? From what we hear Princess has become somewhat protective of them. Now we have to worry a little less. She's gotten into the habit of trying to chase big animals away when they come too close to André and Sue. Just yesterday for example she barked furiously at some wild buffaloes in Yellowstone National Park. They came to within a few feet of the two and Princess decided this was close enough and tried to chase them away. Not bad if you consider how big those beast are! So even if she doesn't do anything for us directly, she at least tries to make sure our servants are save. That's one of the benefits of having a dog and we are pleased that we didn't get her for nothing. Now if only she would learn to take our food dish and drop it in front of André or Sue to make them fill it like she does with her own, that would be a nice touch.

Posted by Hunter and Trapper at 8:06 PM No comments: